Nice to Be Needed

You know the expression, "It's nice to be needed?"

Well, I am Needed all day long. Unfortunately, I am also Needed many times throughout the night. It would be nice to be forgotten for just a moment or two, so that nobody needs me at all. In fact, sometimes I find myself chafing against it and getting on edge for no reason at all. I feel gritty and removed from the moment and then that makes me all the more frustrated. Today was one of those days.

So I went to the park.

It's a nice park. Perched on the edge of a hill. The right ratio of trees to sunshine. Just enough baby-sized swings and toys to keep us happy. Parks in the middle of the day are strange places. A mixture of stay at home moms and nannies who are getting paid to do this difficult job.

While we were there, I felt the minor buzz of annoyance that had been clinging to me all day start to drift away. It was nice to let Owen crawl on the grass with no fear of him getting into something dangerous or falling down and bumping his head yet again. Owen had his first time in a swing. A big Firsts among Firsts. And its pretty hard to be annoyed when your baby is cooing in a swing. 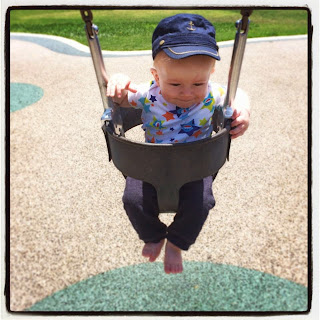 Later, when we were sitting in the shade contemplating state of mind and colorful teething toys, two boys appeared on mini-motorized-motorcycles. Owen was mesmorized by them. I smiled at my baby and "what a boy" he is and then suddenly I realized that my "tough little boy" had crept into my lap, sat down, wrapped his arms around mine, and was watching the motorcycles from the safety of mommy's arms. Guys, this is a Big Deal. My baby never Needs me in this way. Even when he falls down and bumps his head - yes, even when he fell down and cut the inside of his lip! - he doesn't need me. I mean, yes, he wants me to pick him up, bounce him, shhh him, but then damnit, I better put him back down in 1.6 seconds so he can get back to whatever super dangerous thing he was doing. But today....today he needed me to make him feel safe and secure while he watched the world.

Later, I took him over to the playground where two little one year old twins were tottering around. Owen was entranced by the boy twin who was running around like a wild animal and I'm sure he took some notes for his future self. I struck up a conversation with the nanny. In Spanish, just to challenge myself. Once she discovered what I do (did) for a living, she started to share her story of how her husband is on disability and her oldest son was just incarcerated and her younger son is reacting badly and...and...and... It was, sadly, just like the many stories I used to hear every single day. I felt like I was sitting in my office at the hospital, instead of sitting crossed legged and barefoot at the park. Without thinking, I began getting her the numbers for Legal Aid and the 211 Access Line for services. I coached her through talking to her son's teachers, asking for help, etc. All the while I drew the firm line that no, I couldn't be her son's therapist.

When I left, she gave me her phone number and asked me to call her if I found any other services. I took her number, knowing I was likely never going to call, and wished her luck sincerely. When I got home, I nursed my sleepy baby, who fell asleep for his nap while touching my cheek.

So, I guess, there are some times where it is really nice to be needed.