A few months back, my Dad said something to me that I just couldn't get out of my head.

"You know, you've really become comfortable in your role as a mother. In the beginning, I wasn't sure, but now I see how comfortable you are in that role."

I realize he meant this as a kind observation, but my analytical, negative mind just couldn't avoid noting the connotation that, in the beginning, he wasn't sure. So I asked my sister: what did she think? She said, "Well, you know, the beginning is hard for everyone..." Hmm. That sounds like an elusive way of saying I was a hot mess. I asked my husband, who said, "Well you always knew the baby-stage would be hard for you. I just think it was harder on you than on me. But now you're doing awesome."

Wait. What? So did everyone think I was a complete failure during the first months of my baby's life?

I think back on those first six weeks. To say they were "a blur" sounds cliche, but it's true. I don't remember what I thought, what I did, what I wore, what the baby wore, what the weather was like...it was a blur. I had just had an extremely traumatic birth and then was struggling intensely with breastfeeding. I was in tears more often than not and was doing my best to suddenly be a mom. Was I doing the best job I could do? If I'm honest, no...not really. I was just getting through it. I was holding him. I was changing him. I was talking to him. I was nursing him through bleeding nipples. So, yeah, I kept him alive. And I loved him. I loved him because he was our baby and he was a miracle and his little eyes pierced into my soul. But was I doing the BEST JOB I could do? Was I cooing over him in amazement every second? Was I overwhelmed with happiness from everything that he did? Was I delighting in hold him every single second?

Deep breath. I'm going to be totally honest. The answer to these questions is No. In the first six weeks, I was just getting through. Getting through by the skin of my teeth. Nursing him with my teeth gritted in pain and then passing him off to sleep in his swing so I could...I don't know, breathe? Try to process what had just happened to my life? And typing these words makes me want to instantly delete them because doesn't that mean I'm not a Good Mother? But I'm not going to delete them. It's what I felt. I look back on his newborn pictures and I am amazed by him and I melt in love and adoration, but deep down, there is a guilty feeling because...I hardly remember those days. Like I said, it's a goddamn blur.

After the first six weeks, it got better. The pain of breastfeeding subsided. The trauma of the birth faded somewhat. And I fell more and more in love with him. Now I did cherish every second of holding of him. I stroked his head in amazement while he napped on my chest. All of that new-baby-stuff that for the first six weeks didn't happen as much as it should have in the first six weeks because I was a catatonic invalid.

But was I a Good Mother in the first six months? Well the truth is, back then, I was still resenting the role somewhat. I had decided to be a stay at home mom. I was lonely. I hated housecleaning. I hated not getting dressed in real clothes or not having the time to take a shower. I felt jealous of people who could have "time to themselves." So even though I was completely in love with my baby and I was giving him everything he needed and more, I still couldn't wear the Mother Role with ease.

After those first six months, the shoe fit. Now, a month away from one year, the shoe is like a second skin. So ask me now if I'm a Good Mother? The answer is HELL YES.

But in the beginning? Truth be told? I was just doing the goddamn best I could. I think what my family was gently trying to say is, the role didn't come as easily to me as it does to some. I wasn't able to jump in selflessly. Instead I blearily had to find my way around and then figure out how to be this new person without feeling angry about the things I was giving up. And don't get me wrong. I wasn't resenting my baby. I wasn't doing anything wrong and he wasn't lacking in any way. In fact, if you were watching from the outside, you would say I was doing it all right. But, that little elusive thing that my family all noticed was...I think I just had a bit of a slower learning curve than some.

So, to all you Slow Learner Mom's out there - It's ok. Do the best you can. Love your babies. Love yourself. Give them what they need. And ask for what you need too. Figure out how to be the Mom you are. And don't hate yourself if it doesn't come to you immediately. 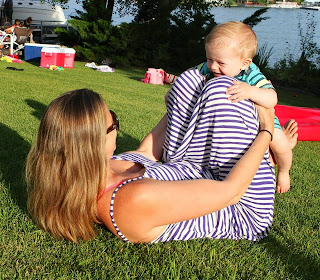