The "Art" of Weaning

Nursing. Breastfeeding. Feeding your baby from your body.

We got off to a rocky start. I cried. I hated it. I dreaded it. I didn't think I'd make it. But I got through it. (For those of you still in those difficult first weeks, I wrote a post about the things that helped me in the beginning). After I made it through the first six weeks, I set my goal at a year. But inwardly I knew I'd be ok with going only six months. At six months, I laughed at the idea of stopping right when we had a beautiful rhythm and I was in love with the ease and simplicity of breastfeeding (as a stay at home mom...to those of you who pump, I applaud you!). So I confirmed that I would breastfeed for a year. Then I would take a year off to "have my body back," before planning the second pregnancy.

Great. Wonderful. Now here we are. I have a one-year-old who still nurses day and night. It's time...right?

I'm going back to work for just two days a week. Whether I want to think about it or not, even those two days a week bring up the clear question of weaning. Weaning your baby is such a complicated thing. The meaning it has for each mother is intimate and unique to her. In fact, I'd go as far as to say it's private and should not be questioned. The why behind your choice to wean belongs to you. So, then, why do I not know my own feelings on this?

I used to crave the moment when I would have my "body back to myself." I always used that phrase. Like there was some part of my body I had given up. I don't feel that way anymore. Instead I feel that when I wean I am giving up a part of my body that is connected to him. A shared part of me.

But the coincidence of this with me going back to work is symbolic. Because being a stay at home mom has changed me. When I wrote a post about the Old Me, there was some wistfulness and yearning for that person. Have I simply buried her? Does she deserve a voice in this too? If I wean him, will I have a whiff of the old freedom that came with being a separate individual?

As always, I am a "middle ground" kinda girl. My plan in this is to night-wean sometime in the next month (yes, we co-sleep and he still nurses through the night) and to continue following his lead during the day. Already he is decreasing his day nursing to the point that my breasts are full and painful by the end of the day. He usually nurses before nap and before bedtime and maybe once in the late afternoon. Am I okay with that amount for another...six months? Another year? Maybe.

I know at this stage that whatever choice I make will be okay for him. Is it good for him to continue getting breastmilk in the second year? Sure. But is it necessary? No, not really. He'll be fine physically and emotionally if I wean him. So then, this decision is not a rational one, but a relational, emotional decision. It's about me. It's about him. It's about us.

As I re-read this post all I see are rational, analytical words. Wasted words. Because I'm no closer to knowing what I want. So. I guess we will just see where this next stage takes us. And slowly, oh so slowly, begin to separate.

Any advice? Thoughts? When did you wean? What is your nursing goal? What will be your goal? 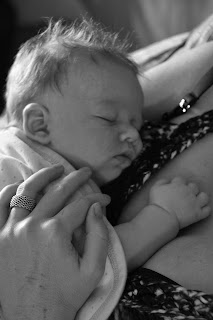