First of all, B.'s friend and his wife had their baby this week. They had their baby at the birthing center we will be using. I got to be there (just by chance) when she was at home going in to pre-labor and I was amazed by how much it affected me. Two things stood out. First of all, she was SO calm and it inspired me and gave me hope. Secondly, I was so excited by what was about to happen to her (and later on, to ME). I haven't heard the whole birth story yet, but they told us that it was amazing, beautiful and exhausting. Oh, and they had a girl. They were one of those couples who waited to find out and as soon as I found out it was a girl, do you know what my gut reaction was? Jealousy. Yes, I know. I thought I was over this. I felt guilty for feeling jealous. But then I realized I wasn't hoping MY baby was a girl, because he's my boy and he's my baby and there was no way in hell I would ever want to change him now. But just a strong feeling that I want to have a girl someDAY. Hoping for the next time.

We got a lot done today. First of all, we bought a dresser. 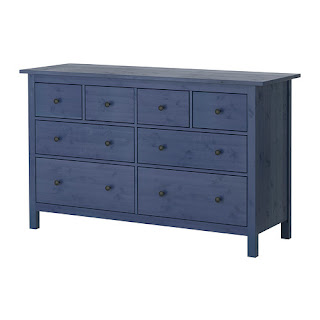 It's from IKEA, so the price is right. I'm going to use the top as the changing table, which also leaves room for a diaper caddy and maybe a cute decoration. The top drawers will work wonderfully for holding clothes or diaper changing accessories or who knows what. What do babies need? Also, I love the blue color.

We also bought a crib. 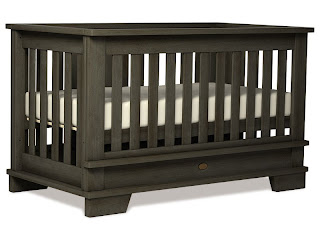 It's hard to tell from the picture, but the crib is a dark grey-ish blue-ish color. I love the color. It's really solid and strong feeling. I also like the shorter size without the back. Is there a name for that type of crib? Anyhow, we looked at different stores and this is the only crib that's jumped out at us. So we decided not to agonize further and just buy it. Then, we found out it's back ordered. Ooops. For ten weeks?? Damn. That means I'll be 35 weeks pregnant when our crib shows up. Now, I know it doesn't matter and that we won't even need the crib in the beginning, but I just want to have it all set up and ready. Anyhow, we BOUGHT it and I like it and I'm glad that decision is made.

Then tonight, I had a productive night. I made chile verde chicken salad for dinner, verde chicken enchiladas for dinner tomorrow, chopped up a bunch of fruit for the week, organized my mail and cleaned up the house a little. I also made a jar of my family's amazing marinara sauce for the new parents. It was hard to figure out what to make them, since she is vegan, vegetarian, and gluten-free. Wow. I actually had to buy her gluten-free pasta, which is a bit sacrilegious to me, but oh well. It's the thought that counts. 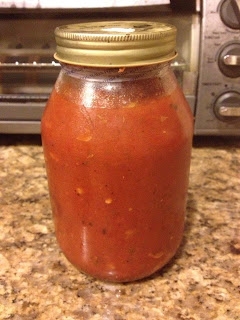 Oh! And I almost forgot! We bought two absolutely adorable outfits at a baby boutique near our house. They were probably too expensive considering how short of a time they will be worn for, but they are soft as a cloud and oh-so-cute. If you look close at the yellow onesie, you will see those are actually dachshunds holding pretzels. What the hell is that? How can you not buy that? 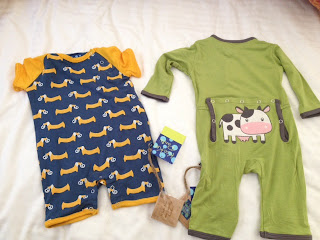 Anyhow, it was a nice, normal weekend and I feel like I got a lot done. I'm proud of myself. What did you get done this weekend?

One more thing... It's been too long since I showed you a true "bump shot," so here you go. 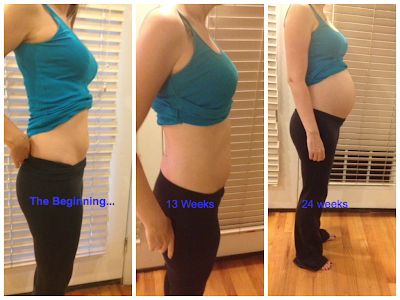