Between Now and Five Weeks From Now 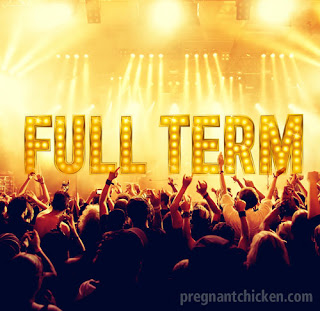 Just time for a quick post here to announce the enormity of the fact that....I've made it to full term! Baby could come at any time! Bow down, people. This is a big deal. I believe B put it best when we were last at a midwife appointment and she was going on and on about "being prepared" and getting lots of rest so you are always rested enough to go through labor. Then she pointed out how I need to stay prepared because baby could come anytime between now and five weeks from now. That is when B so astutely described the situation: "It's like you are preparing for a Marathon. Only, you have no idea when you will have to run the Marathon. Instead, you have to constantly be prepared and ready, just waiting for someone to call you and the phone and tell you to start running." Wow.

Anyhow, as I said, this is a short post. Because I am still caught up in this frantic drive toward The Last Day of Work. Which, actually, is tomorrow. I feel like I used to in graduate school when I was rushing blindly through to the end of the semester and having a hard time thinking beyond that.

I know, in so many ways, my life is about to change. First, not only will my professional identity change (still yet to be determined exactly how) in a large way, but I will also be spending the next five months not working. And yes, yes, I know that raising a baby is the hardest job in the world. But it is a completely different job and identity than anything I have ever done before. I am not sure what it will be like to not be career-driven for that long. Next, the transition to being a mother. I want to give this some more thought and write more on it later, but obviously, this is an extremely big deal. Also, continuing to watch my relationship with B grow and change as we approach this next phase of our long, complicated, enmeshed relationship that is Us.

Finally, because I can't ignore that this is happening....Monte has been a part of our family for almost ten years. He recently took another turn for the worst and they tried one more last ditch effort to save him. We will find out on Wednesday the prognosis. In my gut I have this terrified feeling that Monte's death is going to coincide with the baby's birth in this twisted, cosmic way, such that our first "baby" will leave us in time for us to begin the next stage of life.

SO. Changes. A lot of them. Occurring anytime between now and five-weeks-from now. I am just looking forward to being Here. Being at the transition state where all I have to do is rest, wait, and try my hardest to prepare myself for what's about to happen.

p.s. I will catch up on your blogs this weekend. I know many of you have excited things going on...birth stories, hope-and-anxiety filled cycles of IVF, and some beautiful nursery pictures I just spotted in my feed. I'm hoping after tomorrow I will be much better at staying up to date.
Posted by JustMe at 11:08 PM