Have you ever noticed that people in the blogging world hardly ever speak negatively about their significant others? Despite the fact that most of the blogs I follow include really emotional topics, such as infertility, pregnancy, new parenthood…I never read about the true pain and struggles that go on in the relationships behind the scene. All I ever see is most people referring to their partners as “supportive,” “caring” or “kind.” Sometimes, we might make jokes about him being “clueless” or just “not getting it.” Or, in a really negative moment, we might say we’re “frustrated” with our other half. But really people? Is everything really that sitcom-perfect?

Way back when I was barely six weeks or so pregnant I wrote a post about lying in bed next to B and feeling irrationally emotional. At the time I thought it might be pregnancy hormones making me act that way (insert ironic laugh), but now I realize it was just me. Last night was a flashback to that night. Except, last night? Last night I think was definitely pregnancy hormones. Remember when I naively said in my review of the second trimester that I haven’t been having mood swings? Well I must have jinxed myself because I swear I’ve been an emotional mess ever since.

Last night was no exception. I was lying in bed, propped up on pillows trying to get comfortable and find a position in which I could breathe but wouldn’t feel the knife-stab of pain between my shoulder blades and I started to get irrational. No, that’s not true. It started ok. I asked B how he was feeling, because he had been feeling a bit off all day. He said he was fine. I sat there a moment longer. Then the irrationality set in. I started wondering why he never asks me how I’m doing. I mean, I’m the one who’s pregnant here, right? Why doesn’t he check in with me more? Ask me if I need anything? If there’s anything he can do for me?

At this point I should backtrack a bit and explain that I maybe-just-maybe had unrealistic views of what it would be like to be pregnant. I imagined an overly attentive husband who would be running out to the store to buy things for me, rubbing my back, looking at me with concern and adoration, and basically worshipping me because I was carrying his baby. HA. Where did I learn about this silly little stereotype? The truth is, life goes on. Life cannot pause for nine months simply because there is a baby in my belly. B still has to work – and he works hard. I still have to work and go about my day to day life and no one can do that for me. Basically, we have to continue living our lives.

But still. Lying in the dark last night, I was stuck on the fact that he never even asks me how I’m feeling at the end of a hard day. So I said it out loud. ”How come you never ask me how I’m feeling?” This is where my husband gets less-than-perfect, because he says back, ”I ask you all the time. You just have a terrible memory and your memory can’t extend past whatever feeling you’re currently having.”

So obviously that didn’t sit well with me. I asked him if he wanted to get in a fight and if that was why he said that. Luckily, he chose that moment to get up and go do something in the kitchen. Smart guy. When he got back, I was still seething. I let that fact be known by lots of sighs and irritated movements such as thumping my head back against the pillow or wrestling with blankets. I am so mature. Then, somehow it rapidly switched from anger to self-pity and I found myself doing a lot of sniffing and tears and feeing pathetic.

Then, I felt B’s hand on my arm. No words, nothing more, just a hand on my arm. So, I of course started to cry more. Then, he put his hand awkwardly on my face and started awkwardly wiping at my cheeks like a baby who doesn’t have fine motor control. What the hell? He was basically swatting at my cheeks? So I said, ”What the hell?” And then he started laughing and then I started laughing and then, somehow, we just started talking about random things, like what my sister was up to recently or how annoying my boss is.

And that, my loyal readers, is how a fight ends in a REAL relationship. No dramatic, wrap-up, perfect-solution ending. It just ends and life goes on. And we’re fine. Everything is fine. I can stop being such an emotional mess (yeah right) and maybe he can start checking in with me more because I’m sure, somehow, he got the subtle message that his wife may need more attention in the third trimester. And then? Life goes on. Even when you’re pregnant. Even when you’re pregnant and your back hurts.

Update: After I finished writing this, I realized, irony of all ironies, that today is our anniversary. Eight years married. We don’t have any major plans, we’re both exhausted, B is sick, and he leaves to go on a business trip tomorrow. We decided to watch movies on the couch together tonight and then do a nice dinner on our Labor Day trip to Napa. But it leaves me with the question: do I post a less-than-glowing post about our relationship on our anniversary?? I decided the answer is yes. Because, this post is not just about having a real relationship with real arguments and frustrations, it is also about how real relationships weather time because you don’t get too caught up in the small stuff and instead focus on the strong base you’ve built that keeps you going even when you just want to scream at each other. Sometimes maybe you just need to place a hand on the other person’s arm to remind them of that.

Second Update: Look what showed up at my office after I posted this post! Happy Anniversary Flowers. I really DO have the BEST husband EVER. Just sayin'. 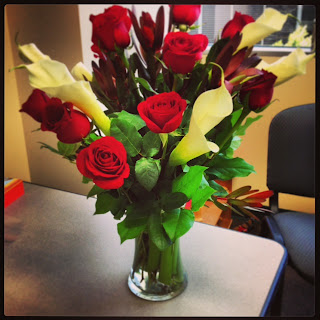