I was woken up this morning by little tiny kitten paws dancing all over my body. Now that may sound adorable. But it is actually annoying. And frightening. You may wonder why I, a woman who weighs an-amount-that-shall-not-be-named, is afraid of a 3 lb kitten? Well, for one, I sleep in the nude. Yes, I do. And for two, those little velvet kitten paws actually are just sheathed razors from hell forged in the pits of Mordor. Seriously. I need to start wearing pajamas.

Lately I have been thinking a lot about Beauty. I considered this last night in the bathtub because I realized my toe nails are a beautiful coral shade of polish. I also noticed that my breasts and belly are round and luscious and beautiful. But then I realized, I'm not very good at finding Beauty in day to day life anymore. I've been pretty inwardly focused and I've been too stuck inside my own Plans. Not to mention, I haven't spent enough time outdoors...where I usually see the most Beauty. Although, I will say, there is beauty in watching my kitten sleep.

Today I fell out of my office chair. Really. I was trying to pick up a water bottle I dropped on the ground. This isn't an easy task anymore. So I ever so slowly leaned to the side...slowly...slowly....getting closer to the ground. And then, still slowly, gracefully, both myself and the chair ended up on the ground. It was a lot easier to pick up the bottle from down there.

I have been agonizing lately about when to start my maternity leave. It's a bit ridiculous, because I'm only agonizing over the difference between one week of work - a short week, so really only three days. THREE DAYS. But it's more of a question between choosing myself or choosing my sense of obligation to work. Mainly my obligation to my clients and trainees. I will not bore you with the details, but that extra half-week may actually make a difference to them. But....not really. It's more in my head, I'm sure. I just...have things I want to accomplish and am having a hard time letting go. But then my irrational fear that Baby could come early kicks in and I start thinking I need to go on leave NOW so I can have some alone time before he shows up. I am incredibly indecisive and B told me he refuses to help me agonize anymore because the whole thing is boring him. Ha.

I've been plagued by insects today. When I went to wash my hands at work I was confronted by the Most Enormous Cockroach Ever sitting on the edge of the sink. He was reddish in color, had a body the size of my thumb, long legs that looked made for jumping at people, and antennae twice the length of his body. He looked like a grasshopper on steroids. He looked like he wanted to eat me. I chose to risk germs over being eaten by a cockroach and so I didn't wash my hands. Sorry. Then, when we took the dog for a walk today, we realized that the trees along the canals were filled with enormous spiders spinning their webs over the walkways, trying to eat happy unsuspecting pregnant women. They were the biggest spiders I've ever seen.

I've earned a new pregnancy symptoms - Heartburn! I've never had heartburn before, so when it started on Sunday I thought I was either getting the worst chest/throat cold ever or I was having a panic attack. Or both. And then I realized what was happening and told B I had solved the mystery of why my chest and throat felt like they had been doused in burning gasoline and he looked at me like I was crazy because I'd never had heartburn before. So I bought some Tums.

Time has become fluid. I have 6 weeks left and I have lost all concept of whether that is a LOT of time or not enough time. m,dfg. 4 5 , <----Bear typed this as he ran by. I left it because maybe it's a mathematical formula that explains how time seems to shift depending on my mood. As in, one moment six weeks is SO long to wait and then the next it is a freakishly short amount of time before my entire life changes. I feel a bit like a tiny boat on the ocean. Tiny as in Stuart Little's size. Just the size of a teacup, floating on the ocean. When you're that tiny, you don't try to fight the waves. Just go with it. Because either way, this baby is coming when he comes. There's nothing I can do to speed it up, slow it down, or determine exactly when it will happen. It just will. Happen.

Thursday is a day of appointments. We are interviewing a pediatrician in the morning. I have no questions planned. I am worried I will just stare at her and blink a lot and ask if she gives kids lollipops. I also have a midwife appt. I'll be 34 weeks. Soon I'll be at weekly appointments. I know every pregnant lady ever has probably said this, but "I remember thinking I couldn't imagine being at weekly appointments." Really. Then I have to take Monte to get chemo. I still feel like I should write a post about the fact that his cancer is back in his lymph nodes, but I'm just kind of avoiding it. B says everything is fine because the vet convinced him that it's "no big deal" if we start the entire chemo regime over again. Aside from the fact that it means thousands more in bills, going back to weekly appts after graduating to monthly, and somehow figuring out how to get him to his appts with a newborn baby - I'm also really upset because it feels a bit like a gruesome, tragic fight with the inevitable.

So. As I forewarned you, this post is about nothing. Just disjointed thoughts. Did you make it this far? I'm surprised. Do you remember anything I wrote about? Insects and Indecision? Great. Sounds good. So, to reward you...I'll leave you with another headless photo of me at almost 34 weeks. I posted this on Facebook and was shocked at how many likes and comments the photo got. I mean, do I really know 50+ people who care about my belly? Really, it is interesting to see the random people who are so enthused by pregnant women. I am sticking with my theory that on some unconscious, primal level we all see pregnancy as optimistic proof that our species is continuing. That is the only thing that could explain that many people "liking" my picture. Of course, they got to see me with my head still ON my body.... 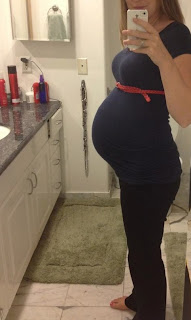