So I’m baaaack! Did you miss me? Did you know that I was gone? I’ve just been disconnected from blogland ever since the weekend of my baby shower. It’s been kind of nice actually, I have been overall way less focused on the internet/pregnancy/nursery/etc. It’s been nice for a bit. But I missed all of you! I’m going to spend way too many hours catching up on reading where you are all at.

But first, I need to catch you up on ME. Because I’m so important, right? No, but really I want to share two big things have happened. First, the baby shower, and then our big trip. So prepare yourself for TWO blog posts. I hope you can handle it…

So…our shower. Wow, it seems like a long time ago now but I’m going to try to paint the picture for you. It felt like a full weekend of Baby Shower because we had friends who flew in earlier in the week to be there. My sister, best friend and I spent the day before running around to Costco, getting mani/pedis, and having a long lunch. The whole weekend was grey and cloudy, but I kept reassuring them that it would be sunny for the Baby Shower.

The morning of, we woke up and it was still grey and cold and I was a bit worried, but I kept saying, “Don’t worry, it will be beautiful once we get up to the park above the marine layer.” And guess what? So true. When we showed up at the park it was brilliantly sunny and perfect. There was a polo game going on on the bright green polo field in front of our picnic tables (have to have horses at my shower somehow, right?), we had five picnic tables under the trees, and everything was looking wonderful. Well, if I have to complain, I guess I would complain about the fact that the picnic tables were on dirt instead of green grass but wait, I’m not complaining. Our shower officially started around noon, but of course I don’t think anyone showed until 12:30, and most not until 1:00. That was okay. We planned for that. We set up the alcohol (which no one drank – ha!), the cake (which was absolutely amazing – shortcake with fresh fruit and whipped cream frosting), and the food (which was catered from a friend’s restaurant and got rave reviews).

In the end, I couldn’t believe how many people showed up. It was so touching to see that we have so many good friends who turned up for us and our baby. I did end up feeling a bit rushed and exhausted because I didn’t have time to just sit and be with anyone, but I guess that’s to be expected.

In the end, it was exactly what I wanted. No baby games, no decorations, lots of friends (of both sexes) just hanging out and chatting. Oh, and there were babies there too! I still didn’t overcome my fear of holding babies and so just looked at them from a far. Very cute. One little boy (8 months old) was enamored with Monte and was crawling all over him. He actually was sitting on him like a horse at one point. And then Monte turned around and ever-so-gently licked him on his face. Priceless.

Oh, and of course we got gifts! Again, everyone was so generous and I was so touched and amazed by how thoughtful everyone is. I guess I should get on the Thank You notes, huh? Gift highlights included a lot of random things from people who are actually parents and so know what is actually practical. Unlike my registry which was filled with decorations and cuteness. Best gifts? My sister filled a bag with adorable clothes, handmade etsy toys, outfits, books, and a giant teddy bear. I think her gifts meant a lot because I could see how much time she had put into picking them all out across so many different places. Plus, she has absolutely awesome taste. She is going to be the best Aunt. Next Lorna, from the LaLaDiaries actually made Baby a blanket. Not only was it handmade, but matched out nursery colors/theme. I was blown away and told her I will not be making anything by hand for her little girl. (Sorry Lorna!). Finally, completely unexpected….a business associate of B’s bought us our Chicco Key Fit carseat! Are you kidding me?? B said it was a “business thing” and I felt momentarily awkward, but hey, we have a car seat! To put a baby in! (right now my sister’s giant teddy bear is in it, but hey…)

So that’s it. I’m going to leave you with some pictures. I do have to say, I almost broke my “anonymous-creepy-headless-photo” thing for this post. It seemed so sad to crop heads out of all of my really cute pictures. But then I just couldn’t get past a nagging paranoia of one of my clients finding this blog and reading all about my bodily experiences during pregnancy. Not cool. So, you get a bunch of weird, headless body shots. To make up for it, I decided to leave the cake photo unedited. That will be a very un-dramatic way to introduce you to our baby boy’s name ☺ 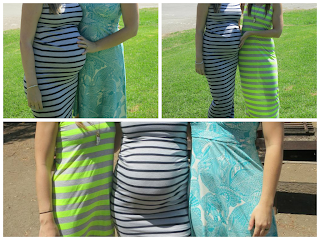 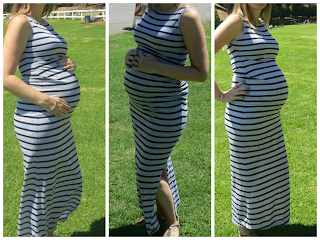 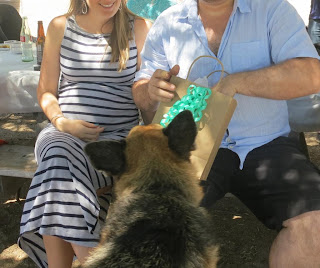 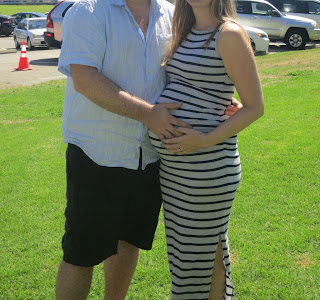 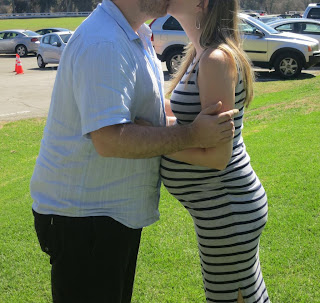 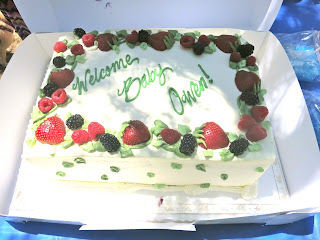 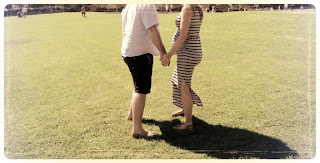