Quick Update: On Dogs and Vomit

So I know I left everyone hanging after my last post about Monte (I'm sure you were all on pins and needles, right?) but we've been through a lot since then. Since it's last Sunday night and I'm in a bit of a Sunday-night-funk, you're just going to get the quick and short update. So, last I updated you, our poor boy had lost his sight over the weekend. Then, miraculously, his vision came back on Monday! We were shocked. Unfortunately, we found out on Wednesday that the cause of his vision loss is cancer - Lymphoma to be exact. So, on Thursday we found ourselves at the City of Angels Canine Oncology Clinic. What a weird place. A lot of emotional people in the waiting room with their cats and dogs exchanging diagnoses, prognoses, and treatment plans. A bit like a cancer support group.

The clinic was amazing and the treatment we received was great. I fell in love with our vet. A cute, little-girl-like woman who curled up like a cat on the floor next to Monte and stroked his head through the whole exam. By this point, Monte had lost a ton of weight, had no energy, and was pretty unresponsive. We thought we were going there to get a timeframe on his life expectancy.

Instead, this little girl in a dress vet told us his cancer is the most common and most treatable form of canine cancer and that he had a good chance of putting the cancer into remission for at least a year, maybe more. We were shocked. We were also shocked by the cost of the chemotherapy. But, what could we do? We agreed to pay it and started the chemo that day.

Now, I should tell you that chemotherapy in dogs is nothing like chemo for people. There are none of the side effects (at least for the majority of dogs) and the impact is dramatic and rapid. Because of this, Monte began getting better the very day that he got his first treatment. That night, he played with his toys and ate a full dinner. Now? He's back to being alert, playful and happy. It's absolutely amazing.

The cost? Six months of treatment and a shitload of money. But it's so totally worth it. 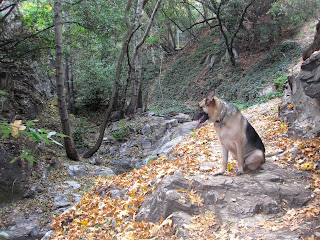 Monte on a hike a few years back 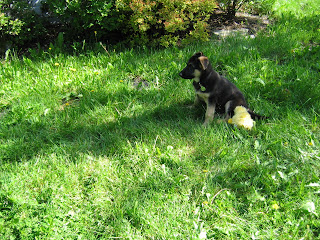 I also wanted to give you a quick update on me. I've started to have a bit more energy lately. Enough so that I feel like I can actually participate in life again somewhat. I've been able to get more work done at work, which is good. And I don't immediately crawl into bed when I get home at night. On Saturday, we went to the races to see the Santa Anita Derby. A long and fun day and there is NO way I could have done that a week ago.

But I'm still sick. And I am so sick of being sick. I will write a post later describing this more in detail, but for those of you who haven't been through it yet, I will say that when you hear that you get "nauseous" in the first trimester, it is so much more than that. It is just an all-encompassing feeling of being sick. And it really wears you down emotionally.

Saturday, the day we went to the horse races, and the day I was so proud of being able to participate in, was bookended with two spectacular episodes of sickness. Starting with vomiting all over myself in the car on the way to the races and ending with the most horrific, disgusting (I will spare you the details) episode of vomiting I have ever had. **Note to self: Stick to bread and pasta. Do NOT eat nachos and cheeseburgers.

Anyhow, that's my update on me and Monte. Now it's Sunday night and I'm left wrestling with the fact that I didn't manage to do anything productive all day today and now the week is starting over. Oh well!