How Celebrities Do It

Well, here I am, a week after our frantic trip to L&D, still pregnant. I was pretty sure things were going to be happening any day after that, but I'm still pregnant. I'm feeling pretty good about it actually because my Mom will be getting into town on Tuesday and my favorite midwife goes on call on Wednesday. SO. If I go into labor on Wednesday, the stars will align just right. It's just...hard sitting in this limbo zone. No more new symptoms. Just ongoing gross things coming out of my body. And really, really tired.

So, to distract myself, I decided to re-watch (yes, for a second time) one of the More Business of Being Born shows. Now, I know most of you have probably seen The Business of Being Born. But have you seen More Business of Being Born? That's right. Ricky Lake couldn't get over her excitement so she rushed out and made MORE episodes. I don't even remember what they are all about, but the one I re-watched is about celebrities who have had (or tried for) natural births. Now, it's a bit odd that we would care about how celebrities give birth, right? Well, actually, maybe not in our society...but I'm not one who watches Real Housewives or The Kardashians, so it's odd for me that I not only watched it once, but twice. I think I just wanted to hear some in depth birth stories to put me in a good frame of mind. Also, celebrities are good at talking and giving lots of details.

You may be wondering what the point of this post is? I actually have no idea. I guess I just wanted to share some thoughts on what I learned. Plus, a lot of it is funny. Oh, and I have nothing but time to kill. SO if you are not someone who cares about what celebrities thought as babies came out of their vagina, feel free to disregard this post and wait for the next one where I will likely talk about something much more important, like Why is this stuff still coming out of my vagina??

Gisele - beautiful, gorgeous, flawless supermodel - is the first Mom on our list. She was probably my favorite celebrity to watch sheerly because I was so absolutely annoyed by her that I kind of fell in love with her. What do I mean by this? Well, first of all...she is (obviously) gorgeous and doesn't appear to be trying at all to look like a goddess. She is just sitting around in a t-shirt and blue jeans, emanating elven beauty. Oh, and her too-adorable-to-be-true dog keeps popping in and out of the camera just to up the perfection factor. So what does Gisele have to say in her oh-so-delicious accent? Well, let me just throw out a few quotes here for you:

"My job as a mom was just to breathe, relax and trust my body to know what it knows how to do."

"I was a big ocean and the contractions were the wave and it was this power…and all the power of the ocean is creating the wave…and it’s just like....SHhhHHhHhH" (the ssshhhing noise is Giselle making soft and powerful ocean sounds)

Yes really, Gisele is, apparently, a secret pregnancy-labor Goddess. When she talked about her birth, she explained that she never had fear and never felt pain. She was just "SO excited" to meet her baby! Oh wait, she does admit that pushing was "SO intense" (picture wide-eyed expression of beauty on her face as she describes it), but then, oh! baby just popped right out in "two pushes!" No big deal. And when he came out, she was just overwhelmed by "pure love, love, LOVE." She goes on to share that everyone is always telling her that she has the calmest baby in the world and she attributes that to the fact that he was born into pure love and calmness. I attribute that to the fact that she's Giselle. So, what did I learn from watching Giselle's story? Well, I want to be her. Or, maybe I want to be a lesbian. And, I definitely wouldn't mind having her birth experience (or her cute little dog), BUT I sincerely doubt my experience will as a transcendental, amazing, and filled with "pure love" as hers was. Because, well, I am me and not Giselle. I live in the real world. Cindy Crawford 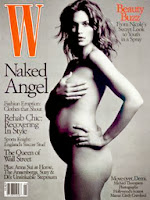 On to the next, beautiful-model-mother. Cindy described her home birth and had some interesting and helpful things to say. Such as, don't start pushing until you are really ready. And, the contractions "are like waves. You can't fight them. You can't jump over them. You just need to dive into them." (Apparently she and Giselle both like ocean analogies). But, the way Cindy described her birth was a bit odd. Very analytical, almost detached. I felt like she was too aware she was being interviewed. Or, maybe I was just contrasting her to Giselle's natural high (or not so natural) of love and amazement. Either way, the only time Cindy Crawford and her mole showed any emotion was when she was talking about the "ring of fire" and she shared that that actually, well, hurt. Finally, she shared that after her baby came out, her first thought was for herself and amazement at what she had accomplished. I dunno, everything she shared made a lot of logical sense. But I didn't feel any "emotion" from her. I suppose her birth story appealed to my analytical side as in, "Ok yeah, ok good point. I'll take that into consideration, Cindy." Alanis Morissette 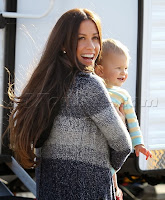 Oh, Alanis, how I loved you in middle school. I remember listening to "Isn't it Ironic" the first time I had a beer at a party and feeling like I was oh-so-crazy and wild. Alanis and I were close. But, you know, after watching her birth story, Alanis is kinda weird. Not that I didn't like what she had to say, for the most part, but she just seems like a very odd person. First of all, Alanis is the only person who compared her home birth to a drug trip. Now, this makes sense to me in that you would likely feel disconnected from reality, etc, but...still. But overall, her description felt more realistic than either of the two supermodel goddesses. Such that, she admits that it was the hardest and most painful thing she has ever had to do. She also explains that she was "so prepared" but that there is "no way to prepare" for what it will really be like. That makes sense to me. But, I don't know, there seemed to be something off in her experience, as if she was fighting something inside of herself during her labor. Here is quote from her that might help you understand what I'm trying to describe:

"I'm not a very physical person. I’ve done everything I could do to ignore the fact that I'm in a body...but with birth there’s no escaping it."

It really did feel as if she was trying to escape the birth and was somewhat fearful of it. But, at the end of her story, she lights up with amazement and joy as she describes her baby latching on for the first time. And suddenly, she seems less awkward and weird and more like a mother. She ends by saying that she understands every choice that a woman could make about her own birth experience. "Home birth? Yes. Hospital birth? Yes. Epidural? Yes." And so, would I want Alanis' birth experience? Despite my deep connection to her forged over a can of warm Bud Light at an 8th grade party, I really hope my birth is a bit different than hers. I don't want to be fighting with myself the whole time. Alysen Hannagen

Oh Willow! I mean, Alysen Hannagen, I mean...Willow! First of all, I should disclose that Alysen Hannagen used to be my next door neighbor. No really. The last placed we lived in LA was in a pool house of a big, beautiful home in Brentwood and, although I don't know exactly which house was hers, we would often see WillowAlysen Hannagen out walking with her family to dinner or to get ice cream or to just...do celebrity things. One time she was even featured in a magazine standing outside our gate. So yeah, maybe I'm a bit biased toward her. But I have to say, her story was my favorite. It felt the most like me. First of all, she was the only one who had her husband sit in with her and help tell the story. In fact, she is the only one who even mentioned a partner in their story. I know B will be a huge part of my experience, so that resonated with me a lot.

Then, she told her story with just the right amount of amazement, humor, and reality to really feel true. She described funny parts of her labor - such as, being fixated on whether they would have enough Toilet Paper on hand for their home birth (I could totally see myself doing that) or being so pissed off at her midwife during the birth because the midwife wouldn't stop writing (she was charting) and pay attention to her. She said, "What was the midwife writing? Was she paying her bills?!? Why wasn’t she paying attention to me?? How rude!" But, humor aside, she also describe birth in a way that makes sense to me. She described "a beautiful pain." Which I like, because it doesn't disregard the pain, but also embraces it. She also described her body becoming animalistic and just taking over. Basically, if I have to choose which birth experience I will have, I would choose hers. Well no, that's not true, I'd choose Giselle's love-fest. Let me reword. If I to choose which birth experience I'm most likely I will have, I would choose Alysen Hannagen's. And not just because she used to be my neighbor.

There were other stories and I had planned to write about them. Especially because some tell wonderful stories of hospital births and all possible outcomes, but, frankly, these seemed the most interesting to me, and I just ran out of energy, and I'm not sure if anyone is even reading this post. Sooo I'm going to leave you with these four.

What about you? Who are you most like? What celebrity birth experience would you choose? I heard Kourtney Kardashian had a pretty amazing one...