So just a quick update. I am "still pregnant" and trying to resign myself to the idea that this could go on for a few more weeks. The sad thing is, I was never in a hurry to get this baby out. I had it in my mind that I would likely go a week or so over and I was totally okay with that. But then, after I started having so many signs, my inner peace got shaken up and the waiting is driving me crazy, because it feels so...imminent?

Last night, taking a bath, trying to do some deep breathing exercises, I told the baby that I would prefer he waits until Wednesday for my mom to be here and so my favorite midwife could deliver him, but I also told him it was up to him to pick his birthday and so he could come whenever he wants. Then, I had a good night's sleep. And by good night's sleep I mean I probably only got up 4 or 5 times to pee and wasn't overwhelmed by hip pain.

Then, this morning, I was describing to B why I think the baby has "dropped" because when I pee now I feel like he drops down and sits right against my cervix as my bladder empties, which does not feel great. It's a sharp pain, which then sets off pain in my lower back and I end up just sitting there, like an old lady, until it eases up a bit so I can stand up. So there I was, describing this to B, and then I started to bleed again. Wait, let me clarify. There is a difference between the blood that drove us to the hospital and the "bloody show" disgustingness that I have been having for the last week. I'm not going to go into details but...it has to do with consistency. Yuck. This morning was definitely more "bloody show" and "mucus plug" (who came up with these names?). But, this morning, there was a LOT more of it. I've had a few episodes where so much comes out I can't believe the baby is still in there...this was like that. So, then we checked the baby with the doppler and his heartbeat is still great, which means? I guess this is just a result of him grinding his head against my cervix?

Now, here I am, laying by the fireplace (yes, a fire in LA), snuggled under blankets and trying to relax. B is working from home today. When I walk around, my lower stomach feels like it's going to rip open and my lower back and butt cheeks feel like I did a million squats. Ouch. I feel crampy and have had a couple of "cramps" that actually hurt. But, I still don't know if they're real contractions, so probably not. Braxton Hicks are a normal part of my life right now, especially at night. I was timing them the other night and they were about 20 mins apart for over an hour. Nothing exciting, but...yeah. Things are happening. And I'm pretty sure from all of these symptoms that Baby is entering the departure gates. You can't really visibly see my belly has dropped, but it just feels that way. And, when he kicks now, the top of his feet and bottom are so much lower than where they used to be. Even the top of my uterus feels lower. It always sends me running to the mirror to see a dramatic shift, but it's not really there. 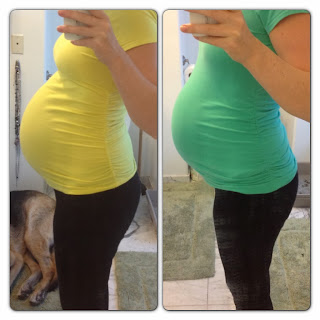 What do you think? The yellow is from right at 39 weeks and the green is today (39+4). I don't think you can really tell a difference, except the shirt seems more "stretched down" in today's pic.

Anyhow, here I am. Waiting. It could happen today. But, I have to remind myself that it still may not happen for another week or more. In the meantime, going to enjoy my cozy day on the couch. I've finally switched over to a Kindle (seriously, I love REAL books and I resisted a long time) and so I've been doing a lot of reading. Since going on maternity leave, I've read:

The Signature of All Things, By Elizabeth Gilbert - Really good book. Written by the author of Eat, Pray, Love, but better, in my opinion. About a woman living in the time where educated women where not the norm and she is trying to find herself and understand her sexaulity at the same time.

Allegiant, by Veronica Roth - You know? The final sequel to the Divergent series? I have to admit, I loved Divergent, but the second two...ugh. Could barely read them. But I have never been able to stop in the middle of a series. The last book does have a surprise ending though.

Zeitoun, by Dave Eggers - Really good. A true story (although reads like fiction) about a man who stayed in New Orleans after Katrina. Opens your eyes to a lot of prejudice and scary government abuse of power that occurred following Katrina.

Buddha in the Attic, by Julie Otsuka - This was just ok. The writing was great and the subject is interesting (about Japanese women who were purchased from Japan as wives to come to the US and then end up put in the US Japanese internment camps during the war), but it was told in such an artistic way that I felt wanting more connection to the characters and one central story line.

Call the Midwives, by Jennifer Worth - I read the whole trilogy. This was good and if I hadn't already seen the shows, I probably would have loved it. But, I have to say, this is one instance where the TV show is better than the book, in my opinion. Her books are written more as a series of essays about childbirth, public health, and social class in the East End of of London. They reminded me a bit of the James Herriot Books (HIGHLY recommend!).

Finally, I am currently reading The Goldfinch, by Donna Tartt. She wrote A Secret History which is a highly disturbing book that I love. I've only just begun this one, but I'm already riveted.

And wow, how did a post about labor symptoms turn into a book review? You got more than you wanted, huh? I guess it's just representative of how boring I am right now. Reading books, writing Thank You Notes (yes, still catching up from the baby shower), and engaging in random "nesting" activities (really important to clean out my cupboard, reorganize my jewelry collection AND manically shop online for important things like new cookie sheets!) is pretty much my life right now. Aside from the anxiety related to the unknown arrival of our baby, I'm kinda loving it :)