One of the unexpected things about being pregnant is that I have become completely obsessed with "showing." When I went to a Baby Shower this past weekend, no one could believe I am pregnant and when I said, "No, yes, I really am," they'd respond with, "But just barely....right?"

Well, I guess that depends on how you define "just barely." To me, the first trimester has been quite a hurdle, so it doesn't feel like "barely" anything. But to women farther along, I'm sure 13 weeks is no big thing. Regardless, I am READY for a baby bump. It's a badge of honor and I want to wear it, damnnit.

It's always struck me as odd that during the first few months, when you are struggling so much and feeling so terrible and really going through the most dramatic changes, you look exactly the same as normal. (Well, unless you check out my cleavage). I guess it's a good thing that we don't start showing earlier, because then it wouldn't be a choice to keep the news a secret. But on the other hand, you feel like there is no visible reason for how you are feeling. Later on, people gush over you, over you seats, inquire how you are feeling. But now? When I'm terribly ill? I get "Oh you must have JUST found out you're pregnant, right?"

Anyhow, in honor of my 2nd Trimester Posting Trilogy (weird, I didn't plan it this way), I've decided to post a "bump" pic. Ha. Actually it just looks a picture of my stomach and hips. Not too exciting. But, here you go. 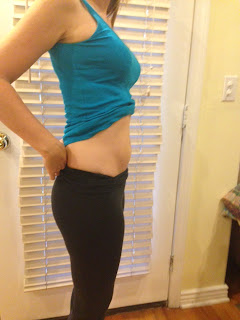 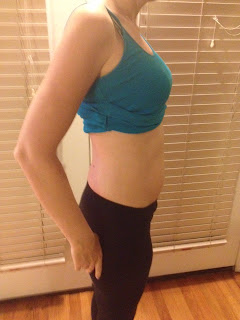 The first picture is 6 (maybe 7?) weeks. You can tell I am a lot slimmer in general with definitely a smaller butt. It's funny, there almost looks to be more of a cute "bump" in that picture, but it was definitely the initial bloating. The second picture is this weekend, at 13 weeks. I wish I had gotten a better picture. The lighting is bad and it's a different shot than the first so it's hard to compare. But you can see I just look...wider. Not like there is a cute bump, just like I've grown. But I haven't gained any weight. Maybe it's all camera angle? *Sigh* Anyhow, that's me. Still feeling sick (but haven't thrown up in 5 days!!) and still looking like non-pregnant me.

P.S. About five minutes after I posted this, I had a rather dramatic puking episode. So much for my 5-day-stretch.
Posted by JustMe at 11:44 PM